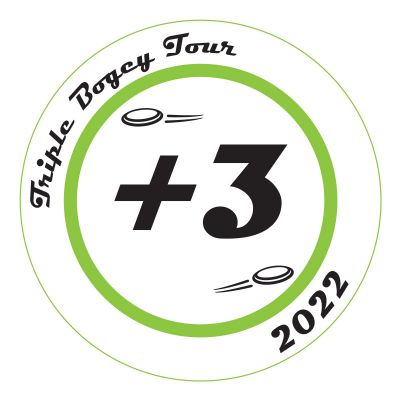 Triple Bogey Tour is a new competition organized by Lagoda Disc Golf, which we launched in 2022 with the goal to offer tournaments that are played exclusively in mixed PDGA color categories where players of both genders are classified into categories according to their PDGA rating.

At the same time, we combined three tournaments into one tour to give players additional motivation to participate in tournaments regularly and fight for a place in the overall standings.

A player who was eligible to participate in a particular category in the first round of the tour (e.g. someone with a rating of 846 sufficient for Green) can participate in that same category on all three rounds of the tour, even if his rating exceeds the category limit in the meantime.

On the other hand, a player with a rating of 870, for example, cannot play Purple or Green, but only Red or Gold.

If a player who does not have a rating, but has played a PDGA tournament and achieved rounds with a rating above the rating of the category, applies to compete in the Purple, Green or Red category, the Tournament director may move his participation to the appropriate higher category.

For categories Green, Red and Gold out of each paid registration fee 5.5 € is allocated towards the overall tour standings payout and after the last round of the tour, best placed 25% of players for each category will receive cash prizes (or equivalent in goods) according to the distribution table.

In the Purple category, there will be no distribution of prizes for the best 25% of players, but only the best 5 players in the overall standings will receive prizes.

The Triple Bogey Tour consists of 3 tournaments that are played according to the following schedule:

Overall tour standings
For the overall ranking, each player wins points according to the placement in each competition and wins 1 point for the first place, 2 points for the second, etc.

Those players who have fewer points are better, and theoretically the best result of the entire tour is 3 points, for the player who has won all three tournaments in his category.

You can download the current Tour standings in PDF format on this page.