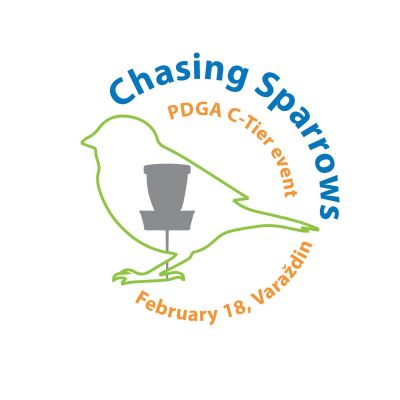 Chasing Sparrows is a one-day tournament that will be played on Saturday February 18th 2023 in Varaždin, in the format of two 18-hole rounds. This tournament is the perfect opportunity for all beginners in disc golf to try a more "serious" competition, because the holes are rather short (45 to 65 meters), there are practically no bushes where discs could be lost, and in each round the same 9 holes are played twice, so it is easier to learn the course and improve your throws. One round of competition lasts up to 90 minutes.

You can follow the weather forecast for Varaždin on the Yr.no page.

The tournament program is as follows:

Given that the competition is played on a 9-hole course, the number of participants is limited to 45.

To sign up for the competition, open the registration page.

The results of the competition will be published on the PDGA website, and scoring will be done through PDGA live.

The registration fee for the tournament in the MPO, FPO, Red and Green categories is €14, and in the Purple category €7, and includes the organization of the competition, a fee to the Croatian Flying Disc Association, a fee for using the course, smaller prizes for the first three players in MPO, FPO and Green, a smaller prize for the winner in the Purple category and the Tournament lottery after the Winners ceremony.

In case of extremely bad weather forecast (very cold weather, strong wind combined with rain) there is a possibility to change the date of the competition. In this case, players who have paid the registration fee and cannot participate in the tournament on the new date have the right to a refund minus bank fees.

Concept of play
The competition will take place in the following format:

Round 1 - groups will be formed with mixed categories and strong-groups determined by PDGA rating. We will try not to put players from the same clubs / countries in the same groups in the first round, so that through the play they can socialize with players they do not see regularly.

Round 2 - groups formed by result, without mixing categories.

Prizes and Tournament respect raffle
At the tournaments we organize, only smaller prizes are awarded to the best three players in the MPO, FPO and Green categories who pay the full registration fee, and a prize to the winner of the Purple category (who pay a reduced registration fee), while we additionally reward all players through a raffle. The raffle is held at the end of the tournament, after the Winners ceremony. The usual top raffle prize is a disc golf backpack.

If a player is drawn in the raffle, and has not met all five criteria, he cannot claim the prize, so the next player will be drawn.
The same player cannot win a raffle prize in two consecutive tournaments.
In the Chasing Sparrows 2023 tournament, the prize cannot be won by players who won it in the Frosty Hills 2023 tournament.

Course
The course of 9 holes is arranged at the location along Vodovodna Street, and in each round all 9 holes will be played twice. The course is suitable for beginners and the holes are 45 to 65 meters long.
You can download the course map on this page in PDF format.

This course layout has been played in 7 PDGA tournaments so far, and the current course recordi is 39 (-15) played by Martin Doerken (Germany, round rating 1021), Zack Bevelacqua (Slovenia, round rating 1014), Derek Robins (Great Britain, round rating 1014) and Bato Sudžuković twice (Croatia, both rounds rated 1010).
Record for female players is 42 (-12) which was played by Wiebke Jahn (Germany) twice in the tournament "the Wedding of Tina & Dinko" (rating rounds 976 and 968).

You can find a list of the best results on the field at the bottom of the page or in the attached PDF document.

Parking
Participants can use the parking lot of the Varaždin City Cemetery (Bus Parking Varazdin on google maps), which is about 250 m away from the hole 9
GPS location of the parking lot (from google map) is: 46.308110, 16.327241
Please DO NOT park at the Vodovodna street.

Toilet
As there is no toilet at the course, we suggest going to one of the two nearby cafes located at the opposite end of the parking lot of the Varaždin City Cemetery - Caffe bar Aleja or Gossip bar (400-500 m on foot), or to Konzum shopping Center at Gustava Krkleca 1 (on foot 700 m, by car 1 minute).

You will be able to use toilett at the place where we will meet up for lunch.

Photos and social networks
All the photos we take at the tournament will be added to the Google Photos Album at the end of each day and you can download them and use them for social networks.
When posting on Instagram, preferably use #discgolfvodovodna #varazdin and tag Lagoda Disc Golf @lagoda_disc_golf