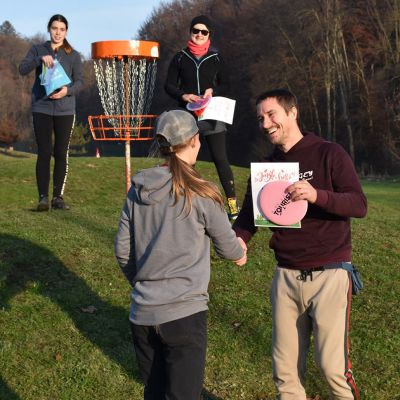 The Jingle Hills Tournament was held for the first time on December 7 and 8, 2019 as part of the 7-day Disc golf Christmas Spirit tour organized jointly by Lagoda Disc Golf, DMK Vall 042 and Disc Golf Tourist (Paige Pierce and Alyssa van Lanen), so the tournament also featured five-time and current disc golf World champion - Paige Pierce.
A total of 35 players participated, along with Paige and disc golf tourists from the US, Canada and the UK, there were also players from the region who came from Croatia, Slovenia, Hungary and Austria.

The competition was played at temporary 18-hole course, the same as the one used for the 2019 Spa Hills Tournament, on a permanent golf course and in the surrounding areas. The par of the course was 60 and the total length of the holes was 2.259 m. The course records before this tournament were 64 in the women's category (held by Tiina Lõhmus) and 53 in the men's category (held by Michael Waidhofer).

In the first round of the competition, world champion Paige Pierce played below her capabilities, but in line with the off-season period and leisurely access to the tournament (virtually no warm-up and no checking out holes before the round started), and with 63 throws made (rating 930) took the leading position. Second place was held by Danica Pajtak (70, +10), while there was a battle for the third was fought among Andreja Bernjak (73) and Ana Goricki (75).
In the second round Paige improved her score by 1 and set a new women's course record with 62 throws (rating 939), Ana Goricki (70) having the second best result of the round, broke to the 3rd position before the competition finals. Danica Pajtak played a round of 71 throws and retained second place, while Andreja Bernjak (75) fall to 4th. Ira Molnar Goricki (73) took the last fifth place in the final part of the event.
The finals were played on 6 holes and the standings did not change.

In the men's category, American player Chris Villa started great from the start of the first round, scored a clean round with 12 birdies and set a new course record with a score of 48 throws, rated at 1.064. The second place was held by Austrian Laurenz Schaurhofer (54, -6), third by his compatriot Stanislaus Amann (56, -4), and another player who was below par - Briton Derek Robins played 59.
The second round saw Villa play slightly worse, but with 53 throws (-7), he confidently held the lead before the finals. Amann played the best result of the round and broke to 2nd place with his score of 52 (-8), while Schaurhofer with -5 rounded three safeties for the podium as there were 13 throws of difference from him to the fourth Robins. There was a tie for the last fifth place in the finals as Hungarian Peter Kiss and the Austrian Manuel Oman, so they both started the competition, with the rule that the first one to lose a hole would be eliminated.
In the finals Villa retained the first place, while a change came in the second - Schaurhofer skipped Amann with -3, who took risk what did not pay off, and who then played +4 and dropped to third. Robins was fourth, and Oman finished 5th after winning the duel with Kiss.

Tournament results are on the PDGA and Disc golf Metrix pages.