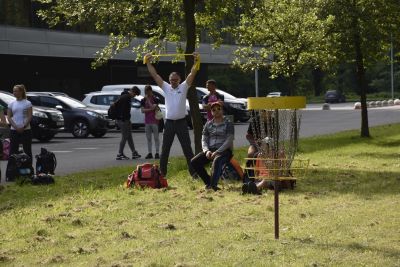 The Triple Bogey Tour consists of 3 tournaments that will be played through the spring of 2022, according to the following schedule:

Each tournament will be played as a two-day three 18-hole round event, without a final round, while after the Winners ceremony, an additional Lagoda Team Game will be played for those teams that will wish to participate.

A player who was eligible to participate in a particular rating based category in the first event of the tour (e.g. someone with a rating of 846 sufficient for Green) can participate in that same category on all three events of the tour, even if his/her rating exceeds the category limit in the meantime).
Each player has the right to participate in a higher rank than the one in which he belongs according to the rating, but if he registers for the first tournament in, for example, Green, he cannot then move to the Red.
Unrated players can apply to compete if they have played PDGA tournaments so far and rounds in those tournaments are, on average, worth below the limit of that category.
A player who has never played tournaments and cannot be determined approximately, can enter the category of his choice, but if he plays rounds above the level of that category in the tournament, he will be transferred to the category to which he belongs according to the level of the game.

The competitors will be distributed in groups of 3 or 4 and divisions will not be mixed (unless it can't be done any other way), while players will, for 1st round, be grouped with players of their respective division, randomly - the way PDGA website arranges it.

In addition to the registration fee for the tournament, all players pay the registration fee for the Tour in the amount of 35 kn / 5 € and the entire amount is collected (in the box on the principle of Ace Pool) and goes to the prize fund for the overall placement of the entire tour. Each category will have its own "piggy bank" and the more players participate in it, the richer the prize pool will be.

After the last round, 25% of the best placed players for each category will receive cash prizes according to the distribution table. Details about the tour points and the percentages of the cash prizes will be announced before the first tournament.

As the primary meaning of the tour is that the player participates in all three competitions and fights for a place in the overall standings, in each tournament only symbolic prizes (small trophy) will be awarded to the winners of each category, while the best in the overall standings will receive additional prizes, and depending on the number of participants through all three tournaments, other more valuable prizes (e.g. disc golf backpack, etc.).

As part of each tournament, after the 3rd round and the Winners ceremony, there will be a team competition Lagoda Team Game, in the format of 2 rounds of 8 holes. Teams of 4 players will participate in this competition. The registration fee per team is 20 kn / 3 €, and the results are counted for the final tour standings where the best teams will win prizes (the value will depend on the number of teams participating).

Rules:
Each team must have at least 2 players with a rating below 888 among the members.

A team may have different members in other tournaments, but at least two members from the first tournament must be in the team in the remaining two tournaments.

A player can only play for one team throughout the tour (so no one can play for a different team in every tournament, for example).

The team game is played in two rounds of 8 holes. Each team member must perform a tee shot from two (2) holes. Players take turns in throws; so that each takes one throw without repeating it until everyone has the same number of throws. Then someone can throw again.

After the first round, the teams play in groups depending on the placement.