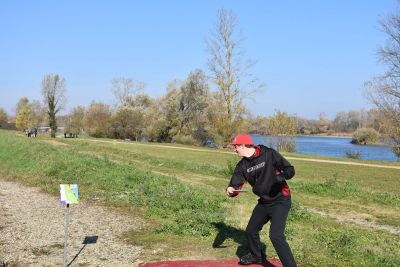 The Drava Forester temporary course, where European Team Disc Golf Championships will be played, will be set up by the sports hall Arena Varazdin.
One part of the course is on the open meadow area by the banks of the Drava River, while the other part is in the forest area surrounding the sports hall. Course is pretty much flat with just some small elevation changes.

Course layout will be finalized at latest 14 days prior to the event, but it is likely that the layout will be similar to what was played for PDGA Tier C event Spring Forester that was played on June 5 and 6 2021.
Course map for that event can be downloaded as PDF at this page.
Layout was par 59 in the length of 1.993m where, with 9 players in the field rated between 950 and 1.006, playing even to par was rated 948.

Baskets used will be DiscGolfPark targets while turf will be used for tees.

It takes 5 minute by car to reach it from the main square and up to 15 minutes from all city areas.
A taxi ride to the course will cost you 20 kn (3 €), while there is also option to use a network of city electric scooters (Bolt) that are charged 0.75 kn (0.1 €) per minute of use, and you can reach the course in up to 10 minutes.
Although it was planned that way, unfortunately, for this event a tournament center will not be inside of the Arena as at the same time (from August 12 to 22) Men’s 19 EHF EURO 2021 (handball, players under 19) will be played in in Varaždin and nearby city of Koprivnica and they will use pretty much all indoor areas of Arena.
For that reason Tournament center will likely be set up in a large tent just by the Arena, but final solution on that is still being negotiated with Arena.