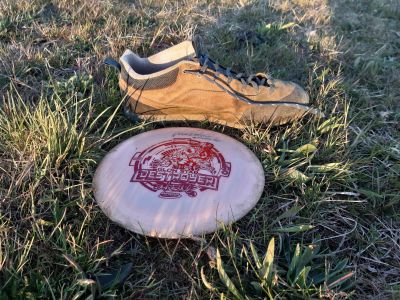 The inaugural season of our consecutive putting contest was a good start. Even though the contest did not grow big, the season one served it’s purpose – to test the rules, allow us to make necessary modifications and improve video editing and production standards. With 21 contestants of 6 nations we can say it was a success, and now we are ready to grow it a bit more. Second season will start on May 7, and new video with rules and all infos will be available tomorrow.

The contest was running for three 7-day rounds, from April 8 to April 28 2020, with a different putting distance set for each round.

Contestants had to record a video of themself using a single disc to make the most consecutive putts from a specified distance, in 7-minute time span.

In Round 1 we have been putting from 6m / 19.68 feet and 18 players joined.
Nino Đurak (Croatia) won Round 1 with 43 consecutive putts made in 7 minutes.
https://youtu.be/zx1wb4EP-0U
Dinko Šimenc was 2nd with 35, and Mario Mesaric 3rd with 34.
Best female player was Birgit Lingenhel (Austria) with 20 putts.

In Round 2 we have been putting from 8m / 26.24 feet and 18 players joined.
Mario Mesaric (Croatia) won Round 2 with 25 consecutive putts made in 7 minutes with additional 8 made after time run out (so only 25 counted).
https://youtu.be/js6L0HphsXs
Derek Robins and Bato Sudzukovic were 2nd with 16 putts made.
Best female player was Natalija Jarec (Croatia) with 10 putts.

In Round 3 we have been putting from 10m / 32.8 feet and 12 players joined.
Mario Mesaric (Croatia) won Round 3 with 14 consecutive putts made.
https://youtu.be/o6S0ASmh2sU
Derek Robins was 2nd with 10, and Tomi Goricki 3rd with 8.
Best female player was Natalija Jarec (Croatia) with 7 putts.

For overall standings we have been summing up putts made in all three rounds but with different value assigned. Each putt made in Round 1 was worth 1 point, in Round 2 that was 2 points and in Round 3 a putt made was worth 4 points.
Mario Mesaric (Croatia) won Season 1 with 140 points. Derek Robins (Great Britain) was 2nd with 99, and Dinko Simenc (Croatia) 3rd with 93.
Best female player was Natalija Jarec (Croatia) with 64 points in front of Birgit Lingenhel (Austria) with 60, and Kristy Lee (Canada) with 56.

Season 1 contest info and rules were as follows:
Preferred way to send in your videos is by uploading un-edited video trimmed to successful run (a few seconds before 1st putt and few seconds after the miss) to your YouTube channel (san be set as private, viewable by anyone who has a link) and then sending us a link.

Short info in a video is available at YouTube.
Daily video updates with top score videos are posted at YouTube channel and to Lagoda Facebook page.

We will announce a winner for each round and the overall winner with summed up scores of all three rounds.
We will start with small prizes and promise to give away at least 1 disc (Disc golf Tourist stamped Discraft Buzz) to the winner of each round and Discmania backpack to the overall winner, but if the contest grows in popularity we will contact disc golf manufacturers and hopefully grow the prize pool.

In addition to announcing round and overall winners, if the contest grows in popularity, we will keep a list of the best World, National, and State MPO and FPO scores, so even if you are not winning overall, you’ll have a chance to hold the unofficial National record for any of these three distances. In case that it proves to make a difference, Indoor and Outdoor rankings might be held separately, but for the current contest both options count equally.
Also, if the contest grows in popularity we will start a new circle of 3 rounds next month (and so on).

Rules:
Fair play is expected from all players. We know that is possible to manipulate the video in several ways to make your score shows better, but we really don’t expect that to happen by disc golfers.
In case there is any indication that some foul play happened, the organizers can disregard this video and it’s score.

You have to make all putts with just a single disc and they have to be consecutive. After a successful putt you need to walk to the basket, pick up that disc, return behind your mark and make next putt. Once you miss a putt the run ends and that is you score.

The player must be the person getting a disc out of the basket. It is not allowed for other persons to help any way regarding putting and getting a disc for the next putt.

We will keep your best score, but also your 2nd best score that will be used as a tie breaker in case of any ties for top positions in weekly contest. You are encouraged to send in at least two videos, even if the score is the same for both. If you improve your score during the round you can send in multiple videos but not more than two of the same score.

All your putts have to be recorded in a video. You can record as many attempts as you want to, but a video sent to us (or posted on public networks) has to be trimmed down to show only the run of successful putts plus additional info afterwards (but not edited in any other way).

There has to be a mark on the ground from where you are making your putts and it should be visible in a video (use a bright disc or something like that). There should be no additional info on the start of your video while at the end of the video, after the last putt is made (or a putt is missed), you need to keep recording, walk foot to foot from your mark to the basket to validate the distance (or use a tape meter to confirm the distance). After that, if you feel like it, feel free to say other things to the camera (your name, country, state, putter you used, nominate friends etc.).

Anyone ranking in the top 5 for State / National / World rankings, and does not use a tape measuer, might be asked to send a photo of the footwear they used in the video along to the measuring tape (or similar) to provide additional distance verification (*but only once the contest grows in popularity ).

Everyone who is trying to set / break World / National / State record is encouraged to provide different proofs that the score is legit and that the video was not manipulated with (for each putt standing 1 disc width behind a mark, something happening in the background (people watching, people walking, cars driving, dog barking etc.)

7 minute timer countdown starts upon the release of first putter from your hand and the last putt to count must be released at latest when timer shows 6:59:99.

There should be no significant change in the elevation from the mark to the basket.

For 6m / 20 feet and 8m / 26 feet you need to show stability after the putt, while when putting from 10m / 33 feet you can jump putt etc.
In case that foot fault happens during putting and player makes a putt he/she can continue putting and foul putt will be disregarded (not counted). In case a putt is missed and foot fault is made, the run is over.

All videos posted to social networks and YouTube should be named "lagodaCputt - " followed by your name, date and other info you feel like. Also hashtag #lagodaCputt should be used in posts etc.
To be included in the contest players need to send their info (link for the video, name, contact) to Ova e-mail adresa je zaštićena od spambota. Potrebno je omogućiti JavaScript da je vidite.
It is not mandatory for videos to be posted on social networks or made public and you can upload your video to some private location (Google drive, Dropbox) and send us a link, but any video ending up among the daily best, in top 5 positions overall or top 10 World or top 5 National / State needs to be made available to organizers to download and use publicly on social networks etc. along to the name and other details on the player. 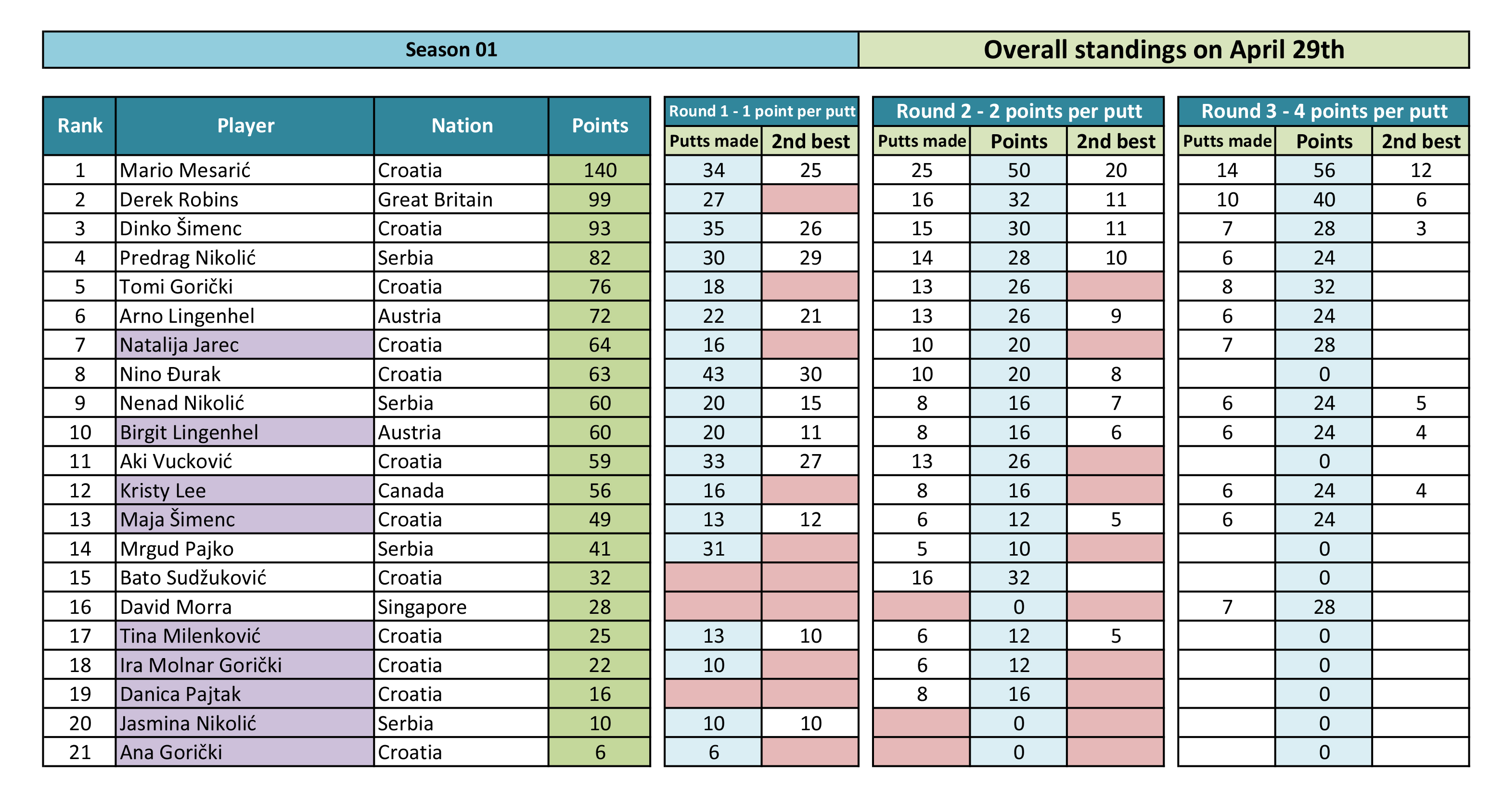