The city of Varaždin 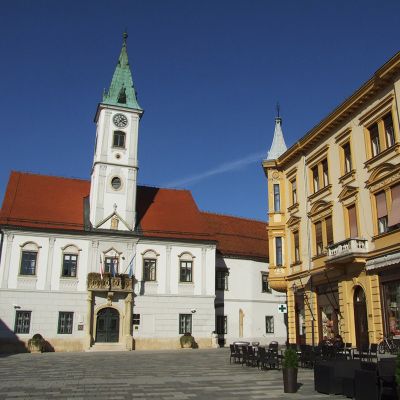 Varaždin is a city in northern Croatia, located 80 km north of the capital Zagreb, a center of one of the 21 Croatian counties. The city currently has about 44,000 inhabitants, and is best known as a place with a rich history, many Baroque and Rococo style buildings, music, textile, food and IT industries.

In the 18th century, Varaždin was the seat of many Croatian nobles, and in 1756 it became the Croatian administrative center (e.g. capital). The great fire of 1776 destroyed most of the city, which is why the administrative offices returned to Zagreb. By the 19th century, the city had been completely rebuilt and expanded, crafts and trade developed followed by silk and brick production.

In the 20th century, the city continued to develop and became the industrial center of northwestern Croatia. In the 1991 war of independence, Varaždin suffered relatively little damage as a large number of Yugoslav People's Army soldiers surrendered after a few days of fighting, resulting in minimal casualties and numerous weapons won for the Croatian Army.