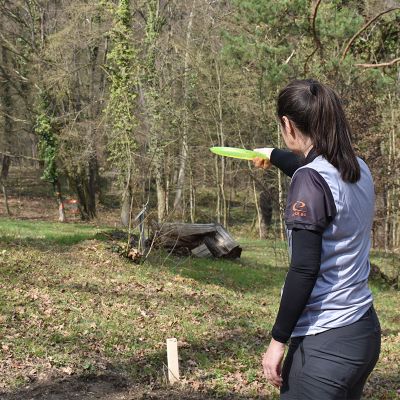 6th edition of the Mars Springs Tournament was held in Varaždinske Toplice on Saturday March 3rd 2020, with attendance by 9 female and 20 male players arriving from Hungary, Serbia, Slovenia and Croatia.

Unlike in previous years when it was often raining or cold weather, this time the weather was almost perfect, so all participants could enjoy the game on Jupiter's Shade course and their stay in the city of Varaždinske Toplice.

Players meeting was held at 10:30 by the course map sign, followed by small awards ceremony where Hungarian player Balint Kazai received the prize awarded to the overall winner of the 2019 Lagoda Fantasy Disc golf league in which he proved to be the best predictor of the results of elite disc golf tournaments.

This league also takes place in 2020 and anyone who wants to play it can still join. (open a separate page for more information).

The usual 18-hole course was played for this event with use of longer (blue) tees, and the only novelty compared to earlier years was the modification of the rules for hole 16 (second blue basket), where a "relief" zone was introduced to speed up the game and make it easier for less skilled players to play.

In the women's FPO category, after the first round in the lead was Danica Pajtak with an excellent score of 54 (-1), which is also the best women's round of the tournament, rated at 902. Behind Pajtak, there were several contenders for the second place that was held by Ira Molnar Gorički with 59 throws, followed by Ana Gorički with 60 and Andreja Bernjak with 61st throw.
In the second round, Pajtak made to many mistakes and scored 65 (+10), what dropped her to 4th place overall, as the three players who had been chasing her lead managed to improve their scores.
In the end, Ira Molnar Goricki won the event with 115 (+5) total throws, Ana Gorički (117, +7) took second and Andreja Bernjak (118, +8) finished in the third place.

In the men's category MPO after the first round in the lead were tied Balint Kazai and Nino Đurak with a score of 48 (-7), followed by Božidar Marić with 49 (-6) and Zack Bevelacqua with (50, -5) and four more players with scores of 51 and 52. The second round brought barely any change, but the drama was not lacking - Aleksandar Bato Sudzukovic played a great round and after 17 holes had a score of -9 what had him tied in the lead with Kazai and Đurak, all three at the total score of -13. But even though it all felt like we will see a tie breaker for the win, it didn't happen. Kazai and Đurak finished on hole 2 where Kazai carded a birdie and split from Đurak, who scored a par, while Sudžukovic carded a bogey 4 on hole 1, thus falling to third place, but still played the best round of the tournament (47 , -7) which is 987 rated.
In the final standings Balint Kazai won the event with 96 (-14) throws made, ahead of Đurak (97, -13) on second and Sudžuković and Božidar Marić, who shared 3rd place with 98 throws.

The "icing on the cake" of this tournament was an ace on hole 6 (double mandatory) scored by by tournament director Dinko Šimenc in round 1 while another notable fact is that Božidar Marić was the only player to finish the event without carding a bogey, and carded only birdies (6 in each round) and par's.

This tournament was also the 1st Round of the Croatian Disc Golf League season 2020. For more information visit the page of the League and Croatian Flying Disc Federation.

Ira Molnar Goricki (Flying Disc Club Zagreb):
- First of all, thanks to Lagoda for a successfully organized tournament with a fairly large turnout of players, both from Croatia and from neighboring countries. Despite the announcements of bad weather, a lot of players gathered, which shows us that everyone is already looking for competition, fun and disc golf.
The competition in the women's category is getting stronger every year so I'm happy to be able to win my first tournament this year. The girls did a great job, as the result shows with only a few points difference between the best players. And more than winning, I am pleased to see some new faces at each tournament, which are essential for the development of the sport, and I hope that will continue to happen.
Congratulations to all the competitors on a great game and can't wait for the season to go on.

Ana Gorički (Flying Disc Club Zagreb, Prodigy Talent Team):
- Before the tournament I did not have high expectations because this is my first tournament with brand new Prodigy discs, but I am very pleased with how the tournament went. I enjoyed fighting for the podium in the final round.

Andreja Bernjak (Disc golf club Pomurje, Murska Sobota, Slovenia):
- Disc golf course in Varaždin Toplice is great for me because holes are mostly short and technical, and again there are several longer ones that test different levels of play.
My first round was quite ok, but I still made too many mistakes and was not happy with the result. In the second round I focused better, was more relaxed, and this was visible on the good score. I also learned that it is sometimes a good idea to look at the current results of other participants on the Disc Golf Metrix live scoring site and possibly adjust my game plan accordingly.
Congratulations to Ira on winning first place and looking forward to the next tournament on this course - the Black Cats PDGA Women global event that will be played on May 9th.

Jasmina Nikolić (Disc golf club Frizbijak, Belgrade, Serbia):
- This was my first competition abroad and I really enjoyed it. The terrain was harder than I am used to play at my home course in Belgrade, but again, it wasn't too heavy. The location and ambience itself is beautiful and I'm happy it was sunny so we could really enjoy this experience. All congratulations to Lagoda for organizing a great tournament. I am full of positive experiences, I met very interesting and cheerful people and I felt comfortable in their company. I would highly recommend to everyone to visit Varaždinske Toplice and this tournament. I congratulate to all competitors for a great game, and we thank our hosts for their warm hospitality and home-like feel.

Balint Kazai (Hungary):
- This was my first tournament of the year, and the weather was nice.  I started the first round with an outside the circle putt, what gave me confidence for the rest of the round. I only realized that I’m in the lead with Nino, after the round was over. In the second round there was a tight battle and I tried not to think about the scores, and just played each hole as we got to it. It worked and I made lots of birdies in the middle of the round, including some long putts.  I looked the live scores when we had only two holes left, and realized that I am in the lead by 2 strokes. Then, probably just to make it interesting until the end I made a bogey on the next hole : )
When we arrived to play the last hole we have had a 3-way tie for the win. I had to make a longer putt to get one more birdie and win the event – and I did it.
I’d like to thank Lagoda for organizing the event, and my cardmates for the great competition.

Nino Đurak (Disc golf club Varaždin):
- Thanks to Lagoda for organizing the tournament in Varaždinske Toplice! The weather was great for us to open the disc golf season. I am glad that many players from all over Croatia and abroad gathered for this event. The course is good, but it would be even better if it would expand slightly and if the tee pads would be provided. I am satisfied with my game and won 2nd place. Congratulations to Balint on his well-deserved victory and all other tournament participants. I look forward to an even greater turnout from Croatian players in the following tournaments.

Božidar Marić (Disc golf club Eagle, Rijeka):
- I decided to play a little safer in this tournament and to card either birdies or pars, and not to allow myself a bogey, which is what I succeeded in, so I am quite satisfied with the performance that had brought me a third place.
With the advent of good weather and a new training location near the place of my residence, I expect further progress in my game and new good results.